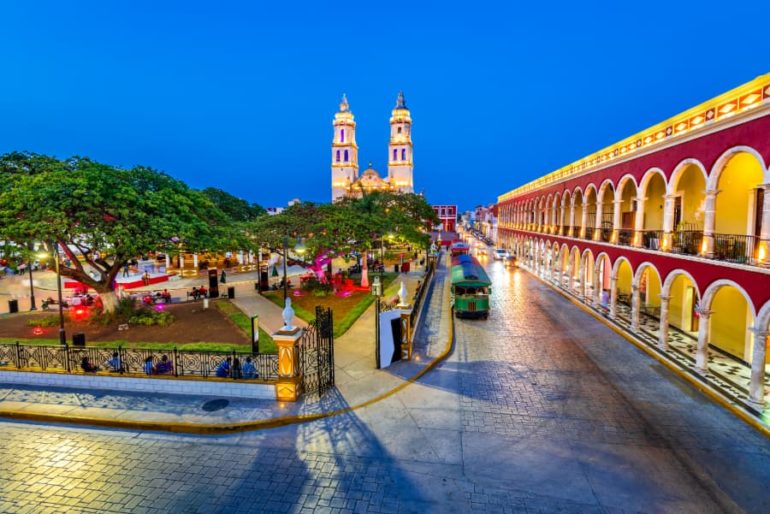 Campeche is situated in Mexico’s southeast, Campeche’s state is blessed with a fantastic all-natural and multiculturalism. Despite this, it’s the least-visited state in the famous Yucatan Peninsula. This means there is much yet to be discovered by international visitors.

Campeche’s extensive shoreline, lagoons full of wildlife, and lush jungle landscapes form the background of one of Mexico’s most exciting states. Campeche is filled with archaeological sites dedicated to the ancient Mayan civilization, many of them are barely visited. Best known among them are probably Calakmul and Edzna. Visit luxurious haciendas that date back to the 16th century. And of course, the colorful city of Campeche declared a World Heritage Site by UNESCO.

For many visitors, Campeche is merely a short stop on their way from Palenque to Yucatan State. Still, Campeche really deserves more of your time if you are looking for adventure and colorful traditions.

Campeche is probably one of the Mexican states with the highest density of archaeological zones. The ruins you find in Campeche have dedicated to the ancient Mayan civilization. Many of them are open to the public yet barely visited. One of the most important sites is Edzna, located near the city of Campeche. The real adventurer should visit Calakmul, surrounded by a biosphere reserve known as Mexico’s largest jungle area. Nearby you can see smaller sites such as Chicanna, Becán, Balamku, and Xpujil.

The mix of Mayan and colonial heritage

The most prominent icon of colonial heritage in the state is, without doubt, its capital city, Campeche. This fortified city is recognized as world heritage. It is full of pastel buildings, cobblestone streets, ramparts, bastions, a “Malecon” (waterfront boulevard), and well-preserved mansions. A lot smaller but also fascinating is the “Magical Town” of Palizada, a colorful little town located on the Rio Palizada. At the same time, Campeche State has preserved many of its Mayan heritage, most notably in smaller cities on the Camino Real Route, among them Becal.

Campeche offers an exciting mix of beaches, mangroves, lagoons, and dense jungle. A large part of the state consists of protected natural areas. Among these are Los Petenes, Laguna de Terminos, and the biosphere reserve of Calakmul. The diversity in flora and fauna is unique in Mexico. And suppose you are in for a wildlife expedition. In that case, you may encounter pink flamingos, pelicans, river crocodiles, caimans, herons, white-colored ibis, white-colored winged ducks, Yucatan parrots, storks, sparrow hawks, howler monkeys, anteaters, manatees, to name just some species.

The regional cuisine has preserved many pre-Hispanic secrets often but not always combined with European influences. Campeche’s kitchen may treat you to typical dishes like cochinita pibil, beans with pork, panuchos, empanadas, tamales, shark tacos, pickled vines, and seafood with many different types of fish, shrimp, octopus, etc.

Festivals and Celebrations in Campeche

The Carnaval of Campeche (celebrated each year during the days before Ash Wednesday, usually in February) is the oldest of Mexico. It starts with the bad mood funeral, represented by a rag doll dressed as a pirate. The doll is paraded through the city streets, to be then placed in a coffin and burned. Once the bad mood has gone, the flower festival begins, a parade of floats decorated with paper flowers and folkloric dancing. The carnival is full of unique traditions. One of them is “the dance of the head of the pig.” This dance is performed by local people dressed in traditional costumes. One of them carries a tray with the head of a pig. The celebrations end with the burning of Juan Carnaval (Carnival John), represented by a doll.

The International Festival of the Historic Center of Campeche (in December) has been held since 1997 to promote the Historic Center of the city of Campeche, declared a World Heritage Site by UNESCO in 1999. It includes classical, contemporary, and popular music, theater, dance, book presentations, and essay prizes. The festival is brought to a finale with a famous Christmas concert in the atrium of Campeche Cathedral.